Preface: This project was born of an idea when I played Zork a few years ago. I was introduced to it by Tim, the other half of the notorious RetroActiveGamers :P Although Zork's mid-eval / skyrim / dungeons and dragons like approach didn't really spark my interest, the type of input felt quite unique. Now mid you, this is essentially me discovering what was the gaming craze of the early 80s computing. Since I was born in the early 90s, my gaming experience started with games like Indiana Jones and the Infernal Machine, Stuart Little, Rayman Hoodlum Havoc, Sonic DX, Half Life and so on. This discovery was very quite unique to me.

So while playing Zork, I got inspired. As I usually do with fascinating new experiences, I seek to appropriate the best of their qualities into my own projects and thus the idea of "Lonesome Trail" came to be. Now I just want to drop the medieval dungeons and dragons part and instead focus on the genres that really appealed to me - Science Fiction and Horror. Whenever the two of these genres come together, I drool at the sight of what comes out of it. Dead Space, Fallout, Soma, Prey, Stalker, Resident Evil, SCP. These games are AMAZING in my books. I also love when old dormant technologies get discovered and re-booted, which is why movies like Treasure Planet, The Bunker (2001), Stalker (Tarkovski), Alien 1 really strike a chord with me. So that's a story I am going to tell. 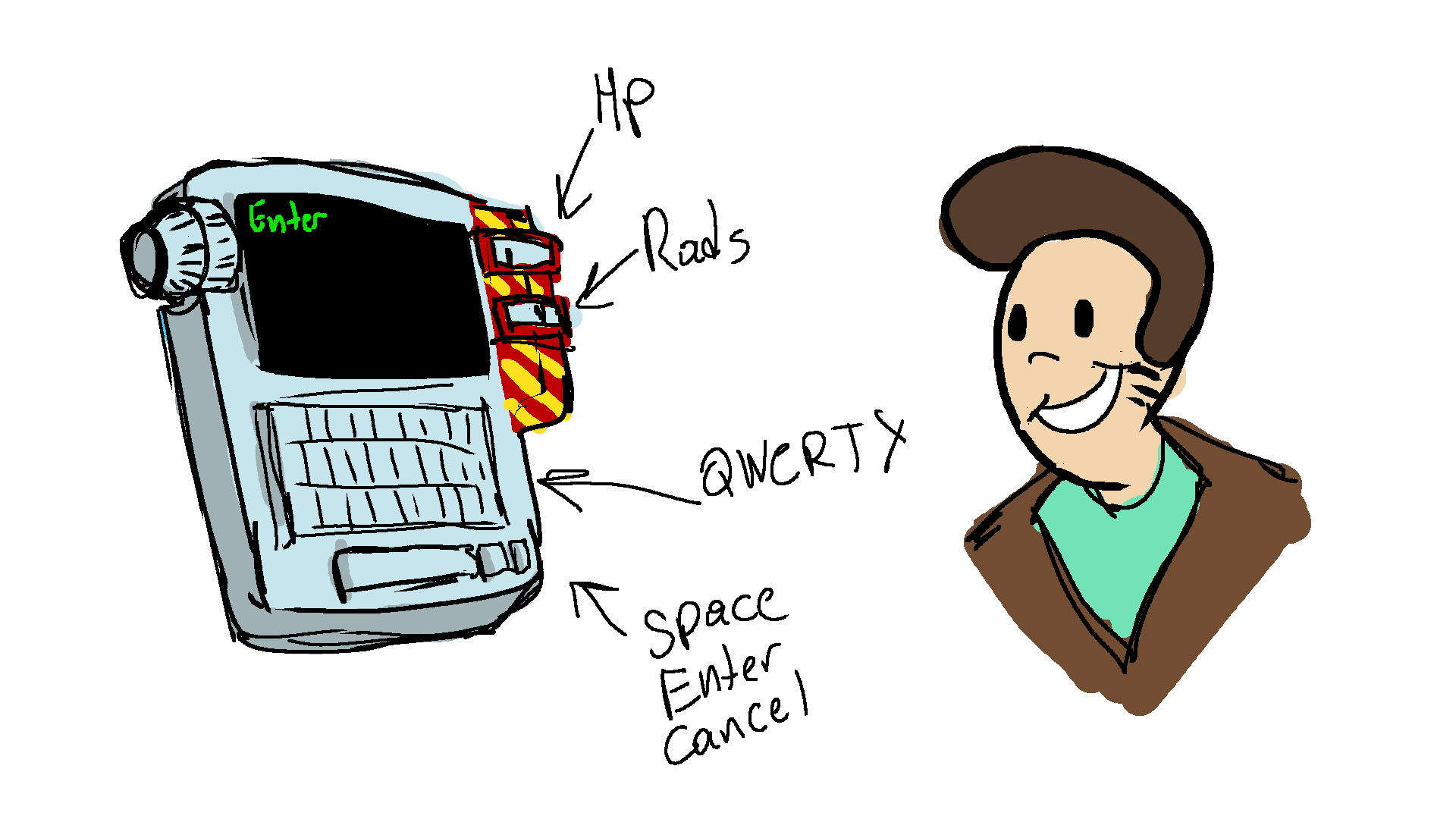 The Concept Some people to whom I've presented this idea have said, yeah but I'd rather you you just make it a mobile game and to be honest... this game is not for those people then. I won't completely take it off the table but the whole idea is to deliver an experience that you can't get on PC, console, Mobile or other mediums. I want the grit, the feeling of handling something awesome in a retro package. I want the paint chips, the rigged feel, the sounds and drive head clinging of an old computer, the feeling of typing on an old terminal. I want all of that to be - the experience. It's going to be tough and I can't predict the future of how it will turn out but, by god I have not seen anything like this before and I sure as hell hope I'll be the first one to offer this experience in this modern age. It is all about Presentation. The packaging and handling, the content delivery and the experience. I am also looking to create a community by making the content creation tools available to the public. I would like to capitalize on a niche and find the people who would like to form a community around the very idea of creating text based sci-fi (or any fi really) games for anyone who owns this specific platform. I want to see if I can turn it into a self sustaining ecosystem.

The writing: The story will be written with the help of my father, Andrew Smirnov for whom I can't pass up an opportunity to throw in a few sentences of praise. He is a mind blowing genius of drama and cinematography, having solved the universal problem of "What can I do to make my script deep and engaging" and frankly, Canadian film industry is bat shit crazy about having opting in for clueless graduate interns with many connections instead of giving Andrew a change at something that's going to enrich the Canadian media as a whole. My father's point of view on writing his own screenplay, and I'm paraphrasing, is pretty much borderline boredom. He has, time and time again, demonstrated his absolute knowledge of the art of screenplay, to the point where he already knows how a story will end before he even writes the log line. Professionals say that when they intimately master their field, they lose the ability to enjoy the medium as their professional side kicks in and starts immediately analyzing everything they experience. In much the same way, writing his own screenplays has become uninteresting, there are no secrets or discoveries to be made and that is the price he has to pay for the genius. Ignorance is bliss as when you know lose the ability to discover new and exciting things, the craft loses it's meaning. He's now working on an online tool which would introduce his method of thinking to screenplay writers globally.

The Mechanics: Here is the list of the mechanics I am looking to implement into the game and hardware that drives it. Some of these options, I find to be more important than others, some feature are simply nice-to-have's and others are must have's. They are not organized in any particular manner.

Game: The game itself is an RPG sci-fi horror adventure game. The writing is going to be a big part of the game and the game-play is inspired by my all-time favorite sci-fi game of all time - Fallout. I would like to implement many of the same loved mechanics in a text based format. How and how well will it turn out, we shall see. For now the features that I'd like to implement are:

The Prototype: I have gotten the prototype to the point where I can input commands and work on the game mechanics. Once I get the basic mechanics into place, I will be free to expand on additional features like separate LCD dispalys for additional heads up info and so on. Basics first. And the basics are running just fine. I'm currently figuring out how I will be handling the data on the SD cards, and most likely I will be-handling it using JSON files. Since JSON files can be worked on using java-script, I will also be able to create the level/quest editor which will right off the bat be ready to be integrated as a web based applications - no install necessary. 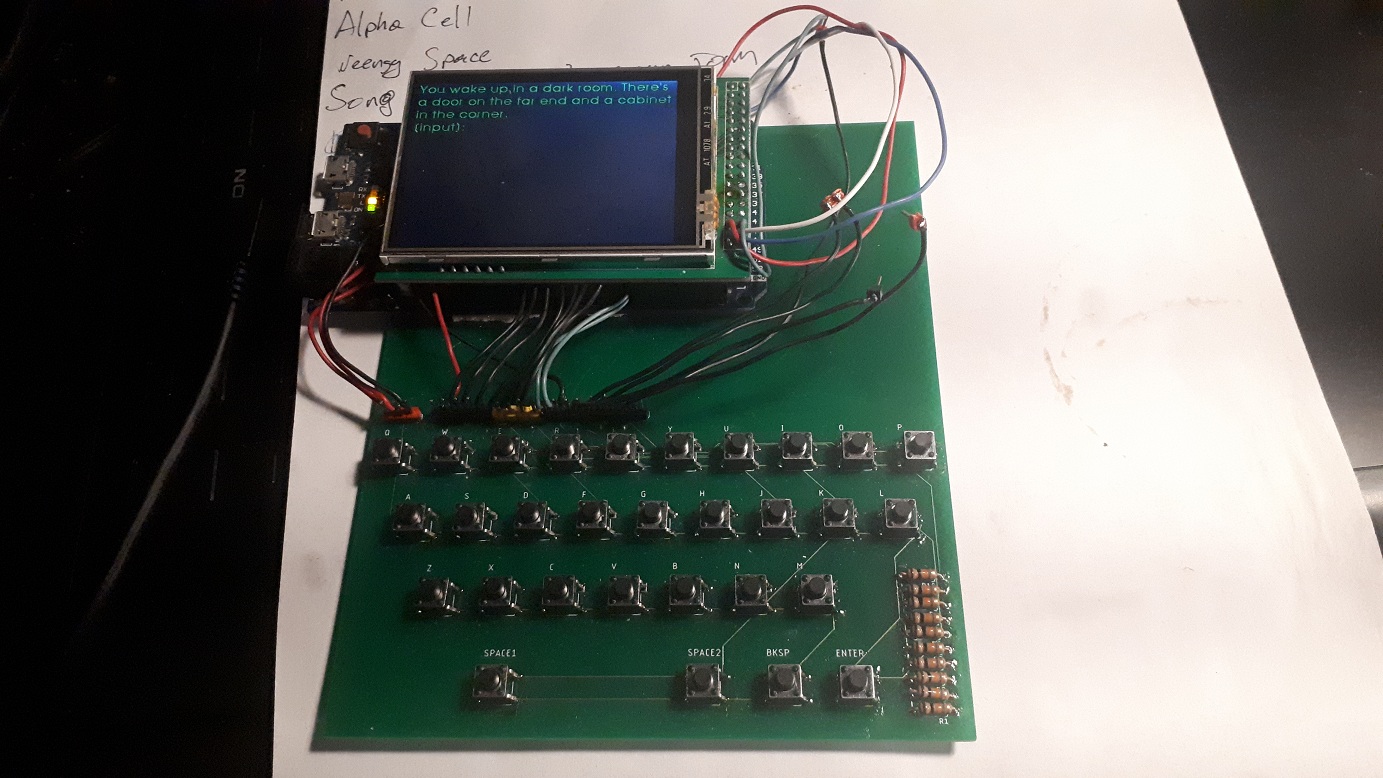 The LCD display was some old thing I bought a few years ago and never ended up getting it running since it's an Arduino Mega shield and the only mega I had was already used in a diy 3D printer. With some help on the Arduino forums, I've gotten the LCD display work with some obscure modification to the community made lcd display driver on the Due. Since then I've bought a whole bunch of different LCD Displays to try, most with less obscure origins much more mainstream support. They also use less pins so hey.. more IO for me and my shenanigans. 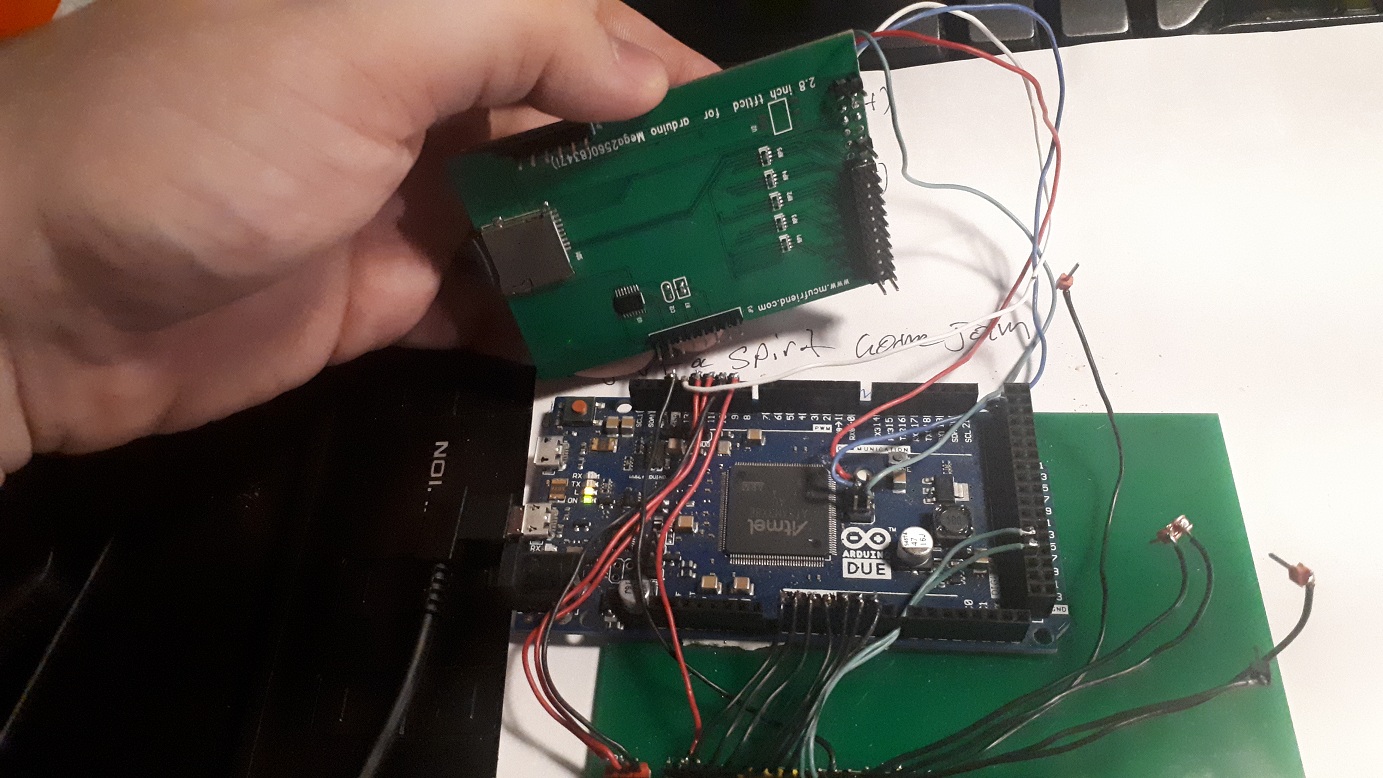 A prototype with lots of wiring, I decided not to solder everything directly to the dev board and rightly so, I completely forgot that many of those pins on the qwerty keyboard are not even connected to anything and I needed up soldering wires to them, you can see many of them dangling loosely with the pins attached to their ends. Good thing I did that as once I realized my goof, moving and re-arranging pins was quite easy. 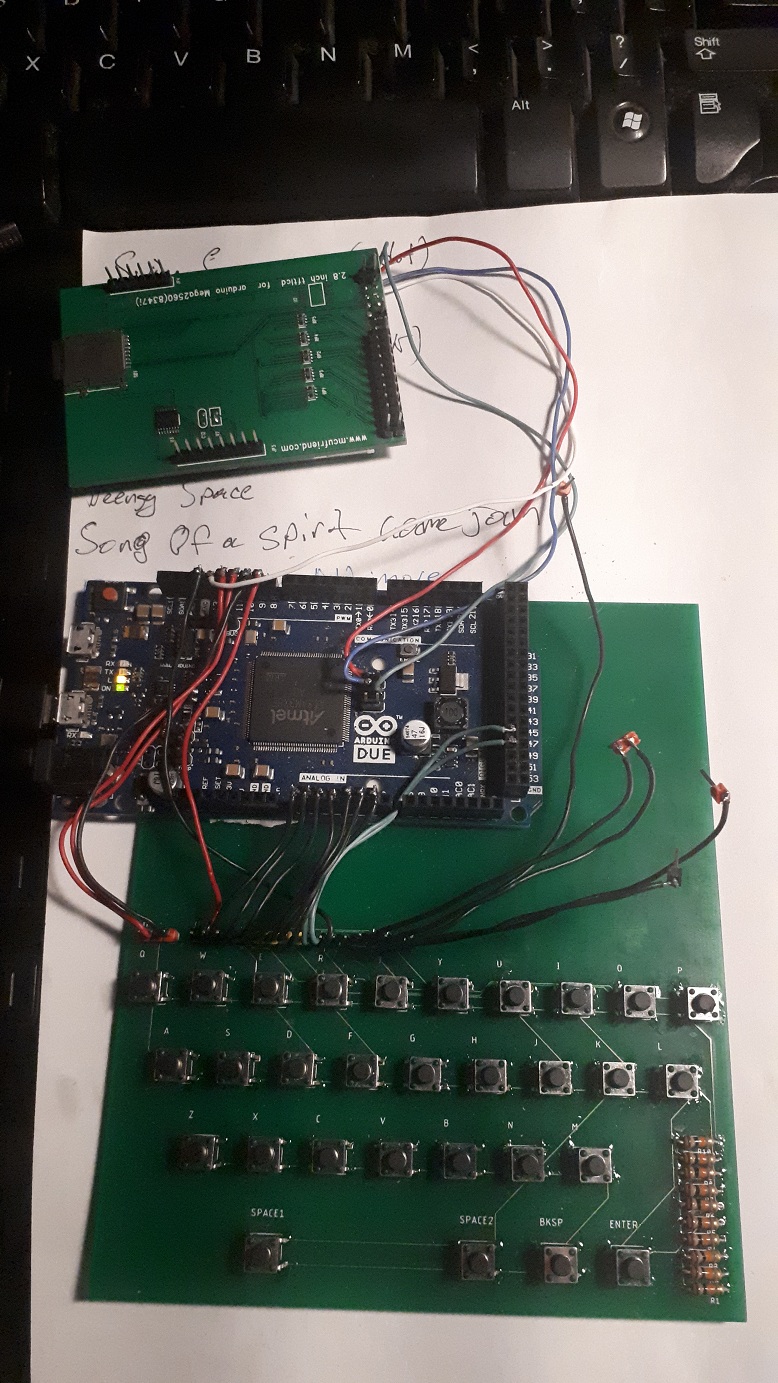 The whole thing in it's glory. Printing some Q's to the screen. 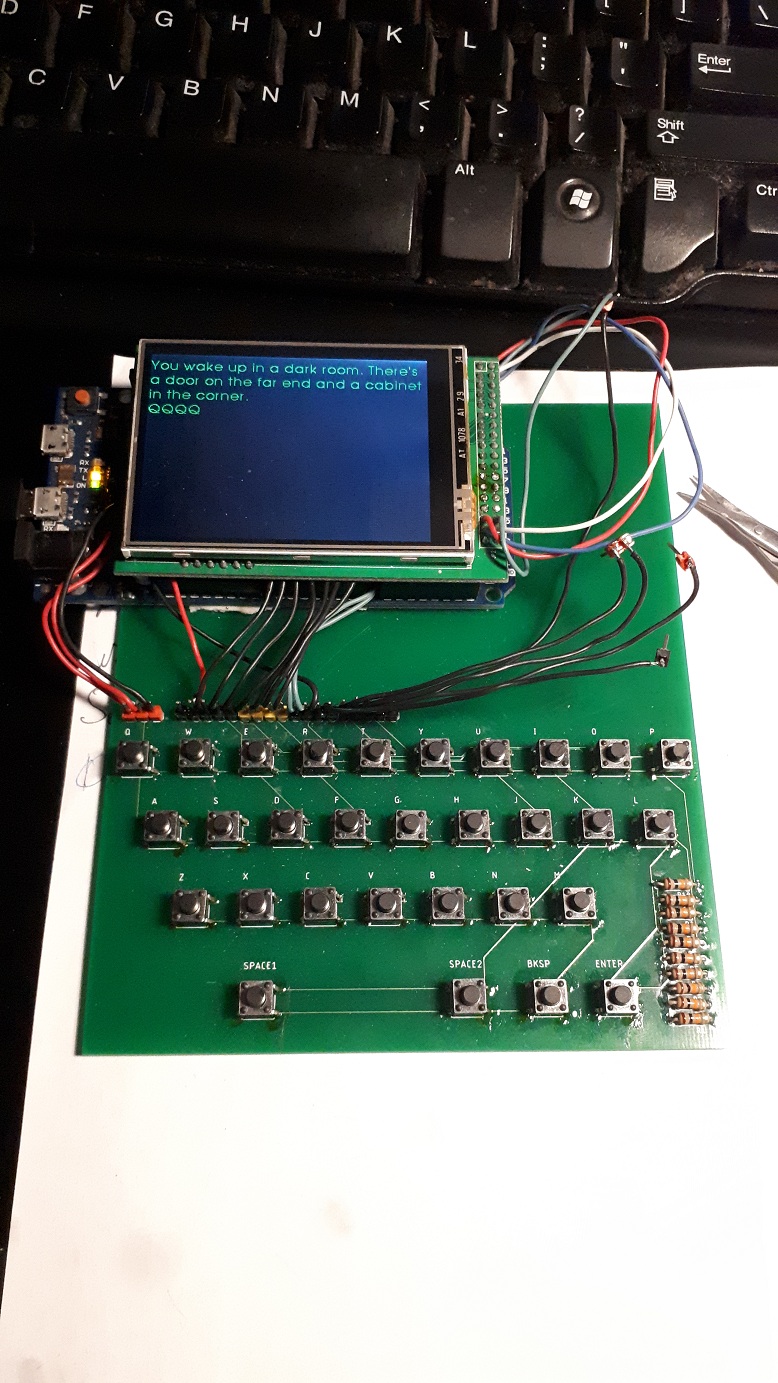 And of course here is the raw board itself. This is the first rendition of the keypad PCB, I'm thinking of adding separate arrow keys for menu navigation, maybe some hot keys for selecting items like medical supplies, weapon and boosters of some sort, ya know hot swappable items. But for now this will do the job just fine. the placement of keys on the sides are a bit uncomfortable / too close to the palms but they work and that's all that matters right now. I just need bare minimum to get the ball rolling on the game mechanics. 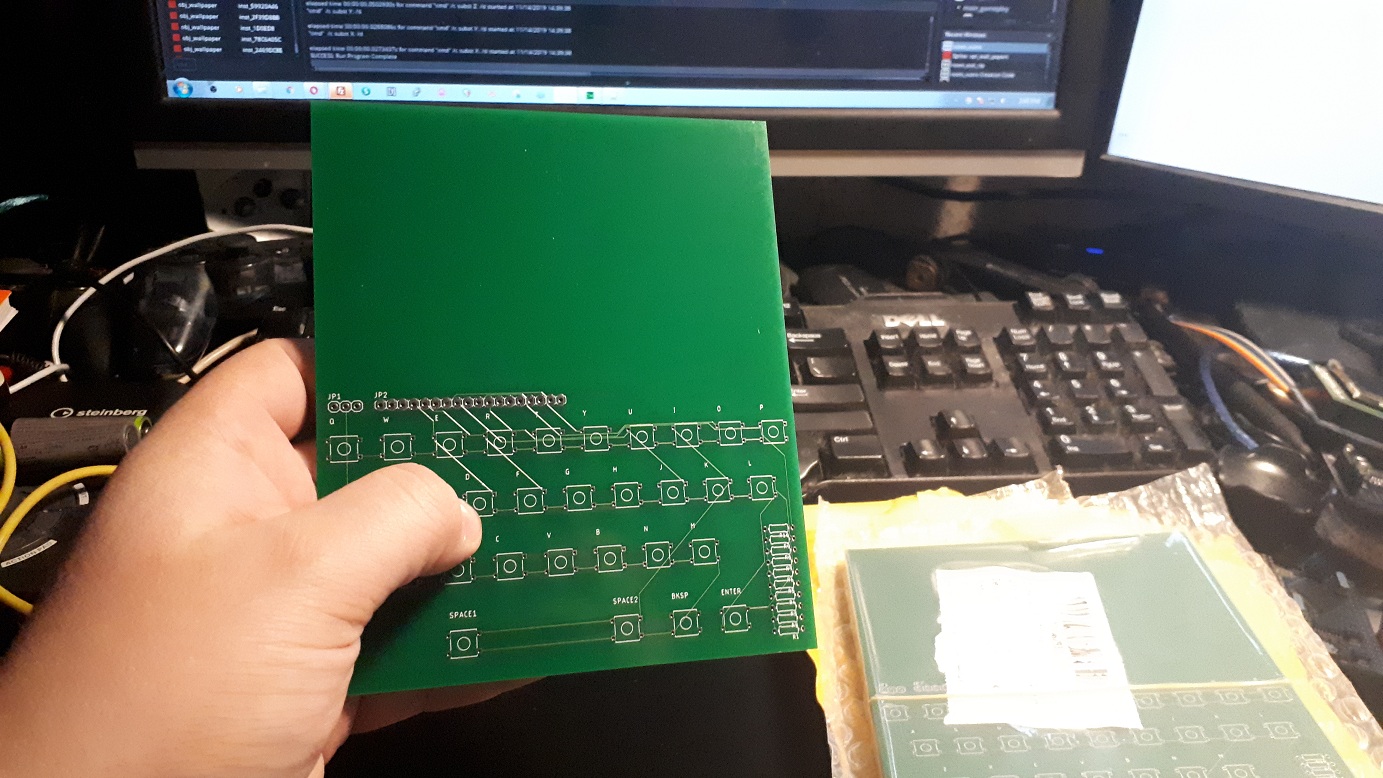